A downloadable game for Windows and macOS

Created over the course of a week for a brief that I also give my students. After visiting the Queensland Gallery of Modern Art, I was to choose an artwork to 'adapt' to a videogame experience. I created Edge under the same brief.

When we went to GOMA, there was a small exhibition on perspective that included a range of interesting video works. One in particular really captured my attention: The Fall From Raiatea by Denis Beaubois, as part of the Terminal Vision project. For this work, five cathode-ray tube televisions sat side-by-side with fuzzy, distorted VHS footage on them. Each television shows footage from a different camera capturing the same event from different angles: the cameras themselves being hurled out the window of the 27th floor of an apartment building. At the start of the work, each camera is turned on, each tv flickering to life. Then Beaubois just sort of holds the rig of cameras out the window for a while, giving a real blurred look at the surrounding suburbs. This footage is already low quality, I assume, because when the cameras impacted the ground, the existing footage was affected as well. I like this idea of the future event impacting the current footage. Eventually, Beaubois flings the cameras from the window and we get this kaleidoscopic, vertigo-inducing sense as the cameras plummet to Earth, each facing a different direction.

But it is once they land that the video is particularly interesting. The footage becomes more messed up as the cameras are clearly broken at this point. The images flicker, distort colour, and get smothered with grain and noise. Each camera frames the surrounding buildings and gardens in a way that could not have been predetermined by the artist. There is a randomness in both where each camera landed, what direction it settles on, and in what ways it breaks. As a viewer, we are stuck with this view for a prolonged period of time until the artist makes their way down from the 27th floor and finds each camera. While watching the distorted, angled cameras, this is what I most thought about: the artist, somewhere off-screen, making their way down the stairs and then searching one trying to figure out just where each camera landed.

View is a pretty literal translation of this artwork and its meanings, but also tries to add a more videogame-specific sort of consideration of medium materiality to it. Beaubois is exploring ideas of authenticity in video both through its materiality and through the multiple perspectives on a single event. View adds an extra television with a first-person view. It is through this television that the player 'plays' the game while they 'view' the other cameras that take up the majority of the screen. I thought this would be an interesting way to present this idea of positionality and perspective in a way that is relevant to videogame ways of seeing.

Read more about what I was going for in my postmortem here.

Move the character with traditional keyboard and mouse first-person controls. The top monitor is the view from the character.

Left click to toss the cameras. Cameras become more broken and glitchy each time they are thrown, altering what the visuals look like.

Once tossed, you can collect the cameras by walking down the tower's stairs and collecting them. Cameras can be thrown multiple times, but only from the roof of towers.

The Fall From Raiatea by Denis Beaubois

Procedural Low Poly Cities was used to produce most of the assets.

(In 2017 I am challenging myself to make 50 little videogames to get more familiar with the tools. I make no guarantee that any of the games are good, but that's not really the point. This is game #27 of 50.) 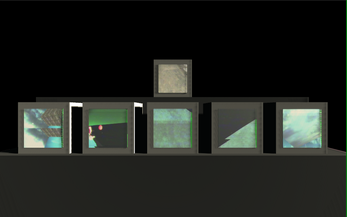 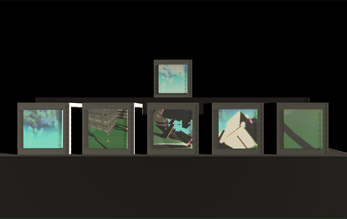